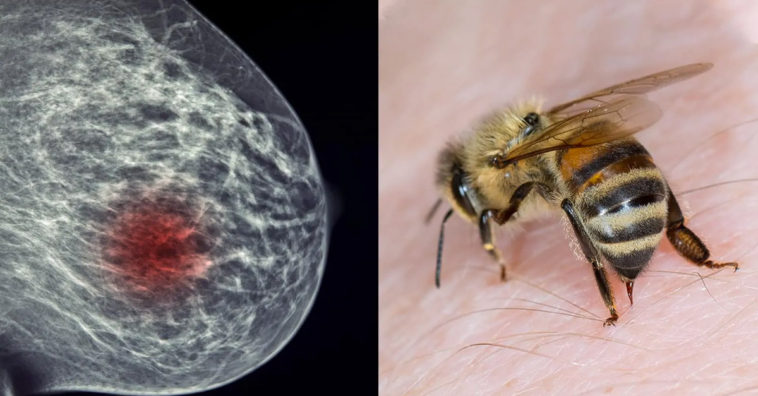 Who knew that one day the honeybee would have such a significant impact on breast cancer research? Scientists have recently found that the venom from these cute little creatures can destroy breast cancer cells. Dr. Ciara Duffy and her colleagues from the Harry Perkins Institute of Medical Research tested the toxin on the clinical subtypes of breast cancer. They included triple-negative breast cancer in their study, which doesn’t have many treatment options available.

“We tested a very small, positively charged peptide in honeybee venom called melittin, which we could reproduce synthetically, and found that the synthetic product mirrored the majority of the anti-cancer effects of honeybee venom.”

The study went on to say the following:

We found both honeybee venom and melittin significantly, selectively and rapidly reduced the viability of triple-negative breast cancer and HER2-enriched breast cancer cells.

Dr. Duffy said that the honeybee venom had a high potency, able to induce 100% cancer cell death. Even more importantly, venom minimally affects normal cells, unlike treatments such as chemotherapy. The research found that melittin completely destroyed cancer cell membranes in 60 minutes or less. Also, within 20 minutes, melittin significantly reduced the chemical messages of cancer cells, which cause cell growth and division.

Dr. Duffy also tested to see if melittin could work with existing chemotherapy drugs. Melittin forms pores in breast cancer cell membranes, which would enable entry of other treatments into cells.

“We found that melittin can be used with small molecules or chemotherapies, such as docetaxel, to treat highly-aggressive types of breast cancer. The combination of melittin and docetaxel was extremely efficient in reducing tumor growth in mice.”

Dr. Duffy began her research by collecting Perth honeybee venom, as these bees have some of the best health in the world. She put the bees to sleep using carbon dioxide and kept them on ice before pulling the venomed barb from the abdomen. Researchers extracted the venom by dissection.

Although 20,000 species of bees exist, Duffy wanted to focus on the Perth, Ireland, and England bees specifically. She said that these bees produced almost the same effects in breast cancer compared to normal cells. Bumblebee venom had no effect on cancer cells even at high concentrations, so researchers used only honeybees.

The therapeutic use of bee venom dates back to the 1950s when researchers found that it reduced the growth of tumors in plants. In the past two decades, scientists have wanted to expand research into the effects of honeybee venom on types of cancers. In the future, scientists will have to do further studies into the optimum delivery method for melittin. Maximum dosages and potential toxicities will also have to be assessed.

According to the Centers for Disease Control and Prevention (CDC), these are the most common symptoms of breast cancer:

Please keep in mind that these warning signs can occur due to other reasons besides breast cancer. However, make sure to see a doctor just in case, especially if symptoms worsen.

According to Mayo Clinic, doctors know that breast cancer occurs when some cells have abnormal growth. While some people have a higher genetic risk of developing breast cancer, lifestyle, hormonal and environmental factors play a role as well. Doctors estimate that only around 5 to 10 percent of breast cancers occur due to inherited genes. If you have a family history of breast cancer, your doctor may recommend a blood test to identify mutations in specific genes.

Other possible risk factors for breast cancer include the following:

Women have a much higher likelihood of developing breast cancer than men. Only one in a thousand men develop it, but 1/8th of all women in the U.S. will get a diagnosis in their lifetime.

As you age, the risk of development increases.

A PERSONAL HISTORY OF BREAST CONDITIONS.

If you’ve had other breast conditions such as an overgrowth of cells (hyperplasia), this can increase your risk of cancer.

A PERSONAL HISTORY OF BREAST CANCER.

If you have had this previous diagnosis in one of your breasts, it increases your chances of developing it in the other.

Specific gene mutations that pass from parents to children increase the risk of developing breast cancer. The most well-known gene mutations linked to cancer are BRCA1 and BRCA2. While having these genes doesn’t guarantee cancer, it can significantly increase the likelihood.

Breast cancer chances increase if you’ve been exposed to radiation on your chest as a child or young adult.

Obesity increases your chances of breast cancer due to higher estrogen levels in the body. Extra estrogen can make hormone-receptor-positive breast cancers develop and grow.

BEGINNING YOUR MENSTRUAL PERIOD AT A YOUNGER AGE.

Starting your period before age 12 increases your risk of breast cancer.

BEGINNING MENOPAUSE AT AN OLDER AGE.

If you began menopause past age 55, you are more likely to develop breast cancer.

HAVING YOUR FIRST-BORN CHILD AT AN OLDER AGE.

Those women who give birth to their first child after age 30 may face an increased chance of having breast cancer.

HAVING NEVER BEEN PREGNANT.

Women who were never pregnant run a greater chance of breast cancer than women who have had pregnancies.

Women who utilize hormone therapy medications that combine estrogen and progesterone to treat symptoms of menopause have an increased risk of breast cancer.

High breast density, or having a lot of fibrous and glandular tissue, increases the risk of breast cancer two-fold. This makes it harder to see cancer on a mammogram because it can blend in with normal tissue.

Although studies have just begun regarding bee venom for breast cancer, results have been promising. The study referenced above found a significant reduction in cancer cells from honeybee venom and a component called melittin. Also, eating a healthy diet, exercising, avoiding alcohol and smoking, and doing self-exams at home can prevent breast cancer.

This article was first published on www.powerofpositivity.com 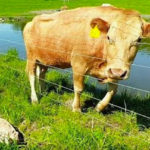 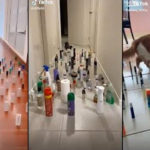