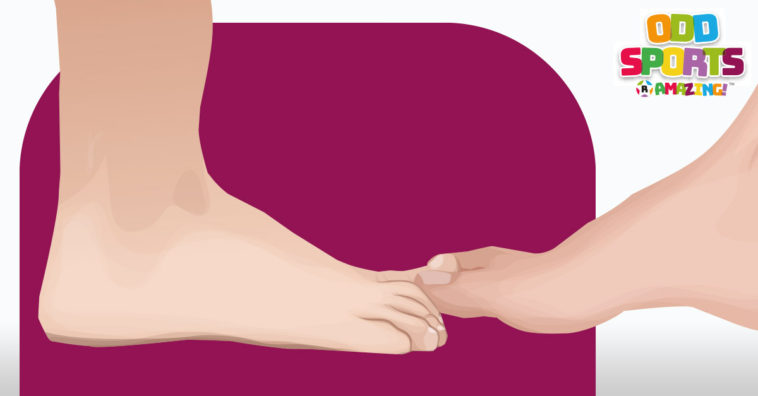 Baseball may be America’s favorite summer pastime, but across the pond, a unique, no-hands sport reigns supreme—and we’re not talking about soccer.

Toe wrestling—yes, toe wrestling—is such a popular pastime in Northern England that there’s an entire championship centered on this sport every summer. Since its inception in 1976, the Toe Wrestling Championship has taken the Derbyshire community near Manchester by storm.

The sport got its start when a group of friends at the Ye Olde Royal Oak Inn lamented England’s lack of dominance in athletics—they wanted a sport where Brits could reign supreme, and somehow, toe wrestling became the chosen activity. (Ripley’s, however, notes that a Canadian visitor won the third annual championship, putting an early damper on the British preeminence of the sport.)

After 40 years and many toe tangos, the sport of toe wrestling continues to gain traction, even if the International Olympic Committee has refused to accept it as an official Olympic sport. Though it might not be a competition on the global stage, toe wrestling definitely attracts interest from around the world. Wendy Livingstone, general manager and events coordinator for Toe Wrestling Championship venue Bentley Brook Inn, notes she gets interest from various international media. In fact, one U.S. film company is shooting a mockup of the competition this summer with long-time champion Alan “Nasty” Nash.

Nash, known for his intimidating “strong man” physique and even more intimidating big toes, has made quite a name for himself in the toe wrestling space. According to ESPN—which profiled him in 2011—Nash won the title on his first try in 1994. Since then, he’s won a dozen titles, including perhaps his most triumphant event in 1997 when he broke four toes in the semifinals, then popped them back in and took home the gold. The toe wrestling titles also led Nash to a stint on this year’s Britain’s Got Talent show for his attempt to regain the title of “Most eggs crushed with the toes in one minute.” (Spoiler: He succeeded.)

HOW TO TOE WRESTLE

Toe wrestling is a competition between two participants. With their bare feet in a square ring, opponents sit on the floor, lock their big toes, and then battle in an arm-wrestle style to wrangle the other’s foot to the sideboard of the designated wrestling area. The art of toe wrestling is more skill than strength; opponents are required to keep non-competing feet in the air with hands flat on the ground.

It’s a best-of-three competition that typically lasts one hour, and fear not: Toe hygiene is a priority. Nurses inspect all toes for fungus and hidden weapons prior to competition. Livingstone says they see about 10 to 30 participants annually. Winners move on through the bracket until the leaders go toe-to-toe in the final tournament.

To win at toe wrestling, Livingstone recommends developing those toe muscles however you can.

“The champion, Nasty Nash, invented his own ‘toe exerciser’ to make his toes the strongest!” she tells Mental Floss. (His exerciser essentially looks like a mini resistance band that he uses across his flexed big toes.)

But even Nash knows strength can only get him so far. He pairs strong toes with extreme intimidation to take home the victory.

“My technique … is to hurt the first person that comes into the ring with me; hurt them bad and terrify everyone else,” Nash told Reuters.

Speaking of injuries, the Toe Wrestling Championship is not for the frail. Livingstone notes in the past, toes have been broken (Nash broke nine as of 2012) and she’s seen a few strained ankles. It also takes a toll on the back, so she advises those with back or spine issues to stay in the crowd.

Chomping at the bit to lock toes with a stranger? You’re in luck. Participants can enter up until the day of for the August 19 Toe Wrestling Championship. There are two divisions: male and female. For those seeking pre-tournament prep, the Royal Oak Inn (the birthplace of toe wrestling) in Ashbourne, England, has a Toe Wrestling Charity Fundraising Event on July 15. Nash will be in attendance, and kids are also invited to put a toe in the ring with the 2017 Kids Championship.

This article was originally published by Stephanie Vermillion on www.mentalfloss.com on the 13th July 2017