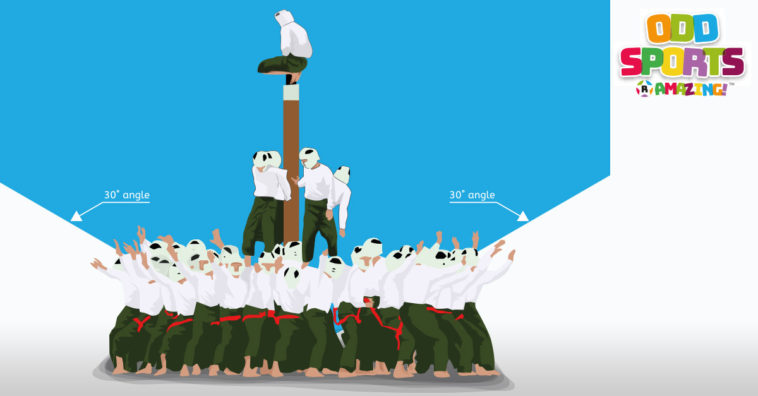 There are dangerous sports like football and wingsuit flying, and there are wacky sports like wife carrying and pumpkin chuckin’

Then there are the hybrids of the two — the sports that are both dangerous and wacky. You may be familiar with things like Cooper’s Hill Cheese Rolling and the Japanese Log Riding Festival, but have you heard of Bo-taoshi, the sport of team pole-toppling?

One of the thing that I like best about Bo-taoshi is the size and structure of the teams. Each of the two teams are massive — comprised of a 75-person offensive squad and a 75-person defensive squad. Defensive players wear white while the offense wears their team colors. The defensive team is tasked with keeping their pole (which run 10-16 feet high) standing upright. As you might be able to guess, the offensive team has the job of taking down their opponents’ pole. Both teams attack and defend at the same time, so it’s a race to take the other team’s pole down before they topple yours.

Bo-taoshi players further specialize into roles like pole support, which is just what it sounds like — they fight to keep their pole upright. Meanwhile, barriers form a human wall around the pole, and (my favorite), the ninja, who maintain the top spot on the pole and whose job is to kick attacking players and help keep the pole position vertical. There’s a lot of face-kicking in this sport, as you can see in the videos below.

Attacks are lead by scrum players, who lay their bodies down for pole attackers to try to run and spring off of towards the opposing pole. Support players help to create distractions and supplement attacks. There is a lot of strategy, feigns and rushes in this game.

The exact story of the founding Bo-taoshi is unclear, but it’s thought to have originated in Japanese military cadets in the 1940s.

You can’t really start to understand Bo-taoshi until you see it played, so take a few minutes and check out these videos:

This one shows both poles in contention during play. Skip to 2:35 if you want to skip past the opening ceremonial events.

Although I would love to see a sport like this catch on in America, I don’t think this is the next kickball. Can you imagine how long the liability paperwork would have to be?

This article was originally published by Shea Gunther on www.treehugger.com on the 5 July 2017